This Wäller Tour shows Waldbreitbach and the Wiedtal from its most beautiful side. Magnificent views from the heights, the idyllic Wiedtal, the monastery St. Marienhaus and numerous paths ensure hiking pleasure.
difficult
Distance 11.8 km
Duration3:30 h
Ascent449 m
Descent449 m

A hiking map and a hiking guide to the Wäller Tours are available in the Westerwald-Shop.

From the free car parking you can reach the International Nativity and Bible Museum on the western edge of Waldbreitbach via a short access road. Here the path quickly plunges into shady woodland and swings along a narrow path above the village on a slope. Again and again the roofs of Waldbreitbach flash through the trees. Behind the campsite over the pedestrian bridge with a beautiful view of the lively Wied. From now on it goes uphill in zigzag. On a narrow path first climb up an overgrown lookout rock, with a nice view of the Wied valley. A short descent to the deep and steeply incised hollow of the Hochscheider Bach, which leaves wild tracks, especially after rough weather. Steadily uphill, the route reaches the fantastic Bärenkopp with its summit cross and rest bench. A great view invites you to take your first rest here.

Along the outskirts of Verscheid to the high plateaus between Wied- and Fockenbachtal. Wide views to the west, south and east sweeten the stroll along the meadow and field paths. Just recently seen enough of the hilly Westerwald, the pretty Luh chapel is waiting to encourage one or the other to pause.

In the middle of the meadow landscape on the edge of Glockscheid, with a great view over Hausen (Wied), the neo-Gothic towers of the monastery of St. Marienhaus rise up. The mother house of the Waldbreitbach Order of Franciscan Sisters was built in 1886 and is worth a short visit. A steep path curves down from the monastery to Waldbreitbach before crossing the Wied again. On the last part of the route, the Westerwald-Steig then accompanies the course of the winding path along the wooded slope to the starting point.

In the Verscheider Seifen there are steep sections of the path on the right at about 400 m. A yellow-marked access path is an easily accessible alternative route with a slight, even gradient. After approx. 850 m you come to the WällerTour Bärenkopp again.

A3 to exit 35 Neustadt (Wied) and continue on the L270 towards Asbach/Neustadt/Obersteinebach/Niedersteinebach/Hümmerich/Krunkel and then on the K88 and K90 towards WaldbreitbachComing from Neuwied or Neustadt: L255 to Waldbreitbach

Recommended maps for this region: 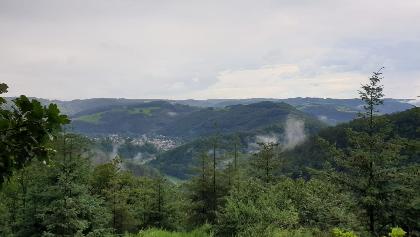 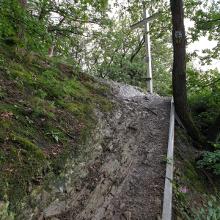 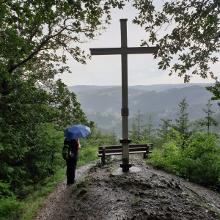 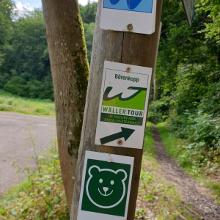