The Romanian Carpathians are a pleasant discovery for skiers and winter sports enthusiasts. They offer in the higher regions up to 120 days of snow and the best period for skiing is from January to March.Well-known winter sports paradises are located on Valea Prahovei and Poiana Brasov, but the proximity to Bucharest also guarantees quite a lot of traffic and congestion on arrival and departure. There is now a ski slope in almost every mountain range, even if the infrastructure cannot be compared to known European ski resorts. But the active athletes get a lot of adventure and untamed nature.
Filter
Reset
- results
No results

Show results in any language
Search here again
No results

Show results in any language
No results

Show results in any language
No results

10 Golden Rules for Skiing and Snowboarding

When it comes to staying safe on the slopes, everyone would like to think that they know how to be safe. But do you know the 10 golden rules for skiing and snowboarding?

1. Respect for others: a skier or snowboarder must behave in such a way that he does not endanger or prejudice others.

3. Choice of route: a skier or snowboarder coming from behind must choose his route in such a way that he does not endanger skiers or snowboarders ahead. 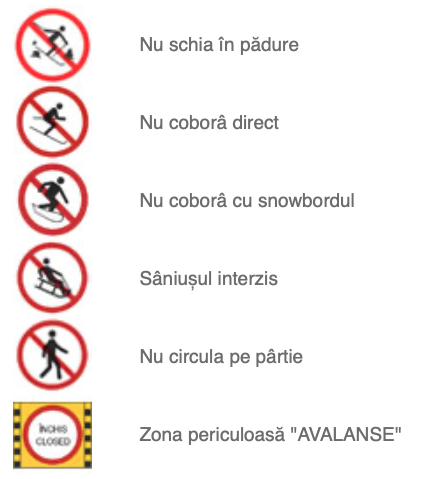 9. Respect the international markings for the difficulty levels of the ski slopes:

10. Assistance & Identification: announce National Salvamont Dispatch at phone number 0Salvamont (0725826668) in case of accident on the slope, specifying the following: name, what happened, how many people need help, when the accident occurred and where the injured persons are. Try to protect the injured person until the team of mountain rescuers arrives.